(Spoiler alert: not the whole plot, but some of it)

A few weeks ago, my friend, Shelly, introduced me to the new hit musical Dear Evan Hansen.

Not to be over-dramatic, but…it’s the most important piece of literature I have heard or read in a very long time.

When Shelly told me it was about suicide and depression and fitting in and lying, I thought, “Wow. Okay. This sounds like it will speak to me since my life story includes all of those things in some fashion or the other.” It also sounded hard, but Broadway musicals can make hard things accessible for me, so that evening, I said, “Alexa, play Dear Evan Hansen.” (Alexa is the voice-activated thingy my daughter got me, which does more than play music – but that’s about all I ever ask her to do.)

I listened and loved it. But, I couldn’t really make out the story line from just the songs, so I looked up the plot. Basically, Evan pretends to have been good friends with a classmate (Connor) who has just committed suicide. Evan ends up being invited into Connor’s family – each member of which grieves very differently. He becomes the son that Connor never was, and they become the parents that Evan never had. Evan’s dad left when he was 6 years old, and his sole-bread-winner single mother was always busy.

There is a song in which Evan’s mother (along with his girlfriend, Zoe, and his friend, Jared) sings about how much it hurts that Evan has so easily chosen a new family, one who can give him all the things she never could. So, we get to hear the pain in his mother’s voice as she angrily sings, “I’m sorry I had it rough, and I’m sorry I’m not enough. Thank God they rescued you!” (Here’s a video someone has created for this song.)

Well, Evan’s lies catch up to him and they begin to unravel. He knows he has no real excuse for the lies he’s spun – except sometimes you want something to be true, so you make it true.

And while Evan is trying to figure out what comes next, how to face the world after being caught in such grand lies, his mother sings the song So Big/So Small which begins by telling about the day his dad moved out. And how she felt so small. And how 6-year-old Evan asked if there would be another truck coming to take Mommy away, like the U-Haul that had taken Daddy that day.

Some of the lyrics of that song are:

I knew there would be moments that I would miss.

And I knew there would be space I couldn’t fill.

And I knew I would come up short a million different ways.

But…[just like when you were little, right now, and for the rest of my life], I will take your hand and say, “Your mom isn’t going anywhere. Your mom is staying right here. No matter what.”

And there I stood in my kitchen, up to my elbows in soapy dish water, shouting “Alexa! Pause!”

It was too much all at once. But, that’s the way it is with grief – you simply don’t know what will trigger it, what it will ask of you, or even what exactly you are grieving.

My second husband died two years ago. He died of depression; the way he died was suicide. So, I knew what to expect when I started listening to this musical about those who were left to live in the wake of suicide. I was not surprised that his sister isn’t all that sad or his father feels resentment. I was not surprised that someone pretended to have been great friends with someone who died. I was ready for all things death and grief and confusing emotions.

But, this musical is also about a single mother who tried to be a father, too. A single, hard-working woman who wanted to give her kids a more leisurely life, some of the nice things that money buys. This woman is terrified she will not be enough, and is watching her son prove her right by slipping so easily into another family.

Now, I need to explicitly say right here in public that I have a 23-year-old son who has been beautifully welcomed into the family and life of his fiancé. He has moved away from me, and has a new home. This is as it should be. I raised Micah to be brave and chase his dreams. He met his dream. Her name is Jenna. And her family lives in Baltimore. So, he has planted his life there, and I am grateful to God and to Jenna’s family for the warm and authentic way they have enfolded him. 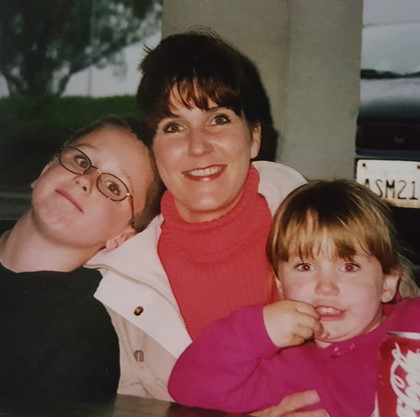 e in the soapy tracks that night. It was the people in this picture. It was 33 year-old Jennifer holding onto her children for dear life. It was this Jennifer in this picture who sat in a Family Law courtroom trembling with the brightest fear she had ever felt – waiting for a stranger with a robe and gavel to decide how many days per month she got to live with her own children. And this Jennifer wondered how in the whole wide world she would be enough. How could she ever find enough time or money or confidence or experience to keep these two safe and nourished and exposed to the right people and questions and possibilities!?

And when it comes down to it, there are times when I was not enough, times I made some pretty lousy choices. But, I didn’t go anywhere. I stayed right there. No matter what. And I’m convinced that was the call on my life – and always will be.

And none of this happens in a vacuum. We single moms have villages who help in a million tiny ways. And the fundamental truth is the single mother in this picture only got through each next day because her parents had taken her 33-year-old hands and said, “Your parents aren’t going anywhere. Your parents are staying right here. No matter what.”