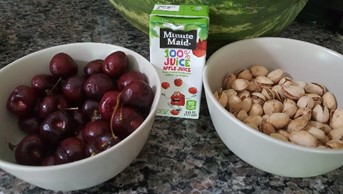 All my adult life, I have read articles about health, weight loss, exercise, changing your habits, and whatever else might apply to my health. Loads of those articles are written by people who have made significant changes in their lives, and nearly all of them started out pretty sure they would never be able to change.

They say ridiculous things like: “I just have a slice of sweet watermelon if I’m craving a piece of cake,” and “If I am craving something crunchy, instead of chips, I just eat a handful of baby carrots!”

Oh, I think when I was younger, I thought maybe those things would work. But, then I bought a bag of baby carrots…and they were nothing like chips. Not for one second or in any way at all were they like chips. They tasted like water…and left my fingers wet. You know what chips do? They taste like salt and fat…and they leave my fingers orange (because the two best chips ever are Doritos and Cheetos). Those carrots were pretty good dipped in ranch, but then I learned that for all the calories I was spending on ranch, I could just eat the chips!

I have also read this sentence just shy of one million times: “When I stopped eating refined sugar, my taste buds adjusted, and fruit was decadently sweet enough to satisfy my sugar cravings; I don’t even crave my evening bowl of ice cream anymore.”

While I believed them that drastically reducing their sugar intake would give their taste buds a break from the ever-present sweetness of sodas and candy and other sugary things – and make less sweet things taste sweeter, I just didn’t believe that they were being authentic about not craving ice cream. Rather, I thought they were being disciplined.

Well, here are the ridiculous and authentic things I have uttered this week, causing my daughter, Sage, to call me out as “one of those people who say those things.”

So, here’s the thing. Until you experience some things, they are only talk. Until you own them yourself, they lie beyond what you can imagine is true. That’s why it was so annoying to me when people said or wrote things like this.

Before I did Whole 30 – and the subsequent weeks of experimentation – I was absolutely sure I would be unable to quit sugar. (I’m not quitting sugar altogether, but that’s another conversation.) I couldn’t really even picture it. The first thing I did every morning was make a big mug of tea with a huge scoop of sweetened condensed milk in it. The first thing I did was give my tongue some (a lot of) sugar. And I did not stop refueling my sugar tank until I went to bed. So, hearing someone say that natural things like fruit can meet our physical need for sweet things…I guess it made me feel weak, like I was broken somehow, with no control over my sugar consumption.

So, I made lots of jokes about it.

But, in my gut I knew those jokes were stand-ins for courage.

And THAT’S what I think Whole 30 takes. Courage.

What if those people who annoyed me with their watermelon-instead-of-cake talk were actually bearing witness to something I needed to hear? What if even while I was rolling my eyes at them, my ears were hearing some things 48 and I would need down the road? What if those people I secretly (or not so secretly) judged as ridiculous were just being authentic in ways that would bring me courage someday down the line?

So, maybe the question is: How does one find the balance between being that preachy person who just sounds like she is bragging…and bearing witness to a new truth you didn’t know you had the courage to learn?

One thought on “Ridiculous and Authentic”