Last week, one of our students stopped by my office while he was on campus. This academic year has been a LOT, and we have learned many things about faith and community, about online learning and worship. But, it has also been plain old sad. We miss each other. So, when Yancy stopped in to talk, I experienced healing right there where two or more were gathered. I asked him if I could join him for worship, and he said they were being extremely careful with distance and masks, and I would be very welcome to join them for noon worship at St. Mark’s Missionary Baptist Church in Bishopville.

This morning, as I drove to St. Mark’s, I thought about showing up in my White skin and my Scandinavian Lutheran ways to an all Black Missionary Baptist church. I suspected there would be styles of singing and praying that might be, if not new to me,

still not patterns I’m used to. So, I told myself that whatever it was, I would say yes to it. Everybody’s clapping? Yes, I’ll clap. Preacher asks for an Amen? Yes, I’ll say, “Amen!” Holy Communion in a different practice than I’m used to? Yes, I’ll eat and drink.

Whatever it was, I would say yes.

When I parked, I found excellent signage saying which doors to use, that a mask was required, and that I was welcome. As I opened the door, two women greeted me, took my temperature, and offered me hand sanitizer before I signed in with my name and phone number – in the event there was a case of Covid, and they needed to contact everyone who had been present. I was grateful for such faithful stewardship of the community’s health.

Entering the sanctuary, I was given a sealed, individual-serving of bread and wine. I was looking for a bulletin; I suppose a bulletin would a) be more like my own tradition, and b) give me a road map for the service. There were no bulletins, but there were eyes smiling over face masks and warm greetings of, “Good morning!” and “We’re glad you are here among us today!”

I found a seat somewhere in the middle, wondering if I had taken someone’s usual place in the pew. I’ll never know if I did sit in someone’s seat, or if that is even a thing at St. Mark’s or if I brought that with me from my tradition. I’ll never know anything about sitting in that pew because as soon as Yancy saw me, he waved at me and beckoned me to come to the front, to the chancel area. The service hadn’t started yet, so I just thought he was welcoming me to worship. Instead, I heard him ask, “Will you sit up here with me?”

Huh? What did he mean? Will I sit up where the worship leaders sit when I am here as a visitor? It’s probably good I had a mask on my face, so all he could see of my confused expression was my probably furrowed brows.

Here’s what my brain wanted to say: Oh, thanks Yancy, but I’m fine sitting in the pews. I’ll just make my way back there (and fumble my way through the service without all eyes on me!).

But, Spirit and I had had a conversation in the car on the way there, and we decided I would say yes.

So, my mouth said, “Alright! I’d be honored.” And I went back to the pew to get my purse and communion elements.

When I got back up the chancel, Yancy asked if I would read a piece of scripture during worship.

Now, I didn’t ask him about this after worship, so I’m doing some guessing about this, but I think Yancy saw an ordained pastor in the pews and asked her to the chancel to sit in a place of honor. And since it was unplanned, he quickly looked through the service to find a piece she could lead. She could read the Word for the people gathered.

I have never been welcomed so warmly or immediately in my life as a pastor. And honestly, it would not occur to me to offer the same hospitality to a pastor who was visiting.

I sat on that chancel stage and bore witness to exceptional preaching and faithful leadership.

Let’s take a minute to talk about the task of preaching. Preparing a sermon can take many forms. Some read and write notes and ideas all week long, write a few bullet points on a note card, and preach extemporaneously. (If this preacher did that, she would take twice as long to say half as much.)

Some people read and write all week long, developing a manuscript from which they speak nearly word for word. I’m a pretty mellow preacher, who writes a full manuscript, practices it multiple times, enough times to really know it, but not have it memorized, and sticks to the manuscript during the preaching event.

Neither way is more faithful, though I can attest to the fact that we manuscript preachers are often told we’ll get better at preaching, and someday we’ll be able to preach without a manuscript. (I will never choose this.) People definitely have a preference.

Today, I was wondering what Yancy would do, manuscript? notes? He had a sports drink and a hand towel within reach, so I figured I was in for some lively preaching – and gratefully, I was right. The reverend did not hold back. He opened with the familiar words my own lips shape each time I preach, “Grace and mercy be unto you from God our Father and from our Lord Jesus Christ.” Then, his finger moved to his iPad and swiped up a little at a time as he made his way through his manuscript. But, this was 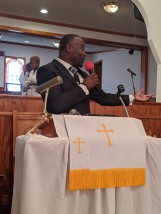 like nothing I had experienced before. A manuscript preacher who whooped as he preached. He had worked out the language of his message in gorgeous, poetic prose. Sprinkling alliteration, rhyme, and repetition at just the right moments. He was reading his manuscript, but he was reading it aloud like I had never heard it done before. Fiery passion, deep love, and vocal ornamentation that became singing at times.

I applauded here and there throughout his sermon. I did that in part because I was saying yes to full participation in St. Mark’s worship today, and others were clapping here and there, but I mostly applauded because I wanted to. It’s what we do when we agree with someone. And here’s what he said that made me jump to my feet: Another person is never the enemy. The devil is the enemy. Another person may be cruel or mean or work to destroy you, but they are not the enemy. They are doing the work of the enemy. They may be caught up in the enemy’s plan, the enemy’s work, but another person is not what you are to fight against. We are, as Paul says in the 6th chapter of Ephesians, struggling against the spiritual forces of evil…not flesh and blood. Black, white, pink, or polka dot, your neighbor is not your enemy. Evil forces are your enemy.

And let me tell you, it was a testament to the faith of those people gathered, those people with Black bodies, whose neighbors so often behave like enemies, to believe and cry out in faith and applaud the words and shout Amen! at the instruction to love your neighbor and recognize their bondage to sin against you is separate from their holiness as a human. What deep love it takes to declare such things!

I didn’t know how to feel about my Whiteness in that moment. I’m still working

through that. But, I know exactly how to feel about the proclamation by my brother, Rev. Yancy, and the people of St. Mark’s Missionary Baptist Church. I am humbled by their welcome and awed by their faith.